A major new publication commissioned by the Cities Alliance provides much-needed data on the changing trends of secondary cities and the role they can play in regional and national development.

A balanced system of cities can boost a country’s economy and double or even triple GDP.

[Brussels, 5 November 2014] -- Cities around the world are increasingly becoming the main drivers of trade, investment and local economic development.  However, not enough attention is being paid to the fastest growing urban areas of all, and the ones with the greatest potential to shape our urban future: secondary cities.

A major new publication commissioned by the Cities Alliance seeks to fill that knowledge gap. Managing Systems of Secondary Cities by Brian H. Roberts provides much-needed data on the changing trends of secondary cities and the role they can play in regional and national development.

These cities, ranging in size from between 150,000 and five million, represent one of the biggest opportunities for urbanising economies globally. Some 75 per cent of the world’s population lives in urban settlements of fewer than 500,000 people.

“A balanced system of cities with strong secondary cities offers tremendous potential for regional and national economic development. Many poor cities and rural regions could double or even triple their GDP,” notes Roberts.

Despite their growing role, countries often ignore the productive role that secondary cities can play in a balanced national system of cities. As a result, many secondary cities are facing numerous development challenges – including creating jobs, attracting investment for needed infrastructure, and diversifying or revitalising their economies – with far fewer options than their larger counterparts.

Managing Systems of Secondary Cities explores how to make these cities more competitive and efficient. It reviews existing literature, trends and redefines the concept of a secondary city within the global context.

The book also includes 15 regional case studies that illustrate the way countries in developing regions have approached urbanisation, decentralisation and other developments in support of secondary cities development. It also examines what international development assistance agencies and organisations can do to support the development of secondary city systems.

“We believe that this is a very timely publication. Secondary cities have been neglected – both by national governments and development partners – for too long,” said Cities Alliance Director William Cobbett.

Managing Systems of Secondary Cities offers a number of useful findings and lessons, including:

--  Secondary cities are being redefined. Function and role – rather than population size – increasingly define a secondary city’s status within the global system of cities. A secondary city will likely have a population or economy ranging in size between 10% and 50% of a nation’s largest city. In China, some secondary cities have populations of over five million; in Ethiopia, they have fewer than 200,000.

--  They are growing fast and struggling. There are more than 4,000 cities in the world with populations exceeding 100,000. Around 2,400 of these have populations of fewer than 750,000 and more than 60 per cent are located in developing regions and countries. Many are struggling with the problems of rapid urbanisation, poverty and job creation.

--  A polycentric system of cities is conducive to the national economy. Countries which have a heavily distorted system of secondary cities dominated by one mega city generally have higher levels of regional development disparities, lower levels of national productivity and income per capita.

--  They are governance and economic centres. Most are subnational capital cities responsible for secondary level of government; a key manufacturing, primary or resource-industry centre; or a global centre of cultural, natural or advanced-industry significance. They can also be major satellite cities forming a cluster of cities in a metro-region city.

--  A balanced system of cities can elevate a national economy. Many of these cities do not have the capacity or advantages to engage in exogenous, export-oriented growth. New combinations of exogenous and endogenous growth strategies are necessary to develop secondary cities in poor regions. An efficient secondary systems of cities could double or triple the GDP of many poor cities and rural regions.

About the Cities Alliance

The Cities Alliance’s overall strategic objectives are to support cities in providing effective local government, an active citizenship and an economy characterised by both public and private investment. The Cities Alliance seeks to realise this goal by: developing and/or enhancing national policy frameworks to address urban development needs; developing and implementing local inclusive strategies and plans; strengthening the capacity of cities to provide improved services to the urban poor; and developing mechanisms to engage citizens in city or urban governance.

Based in Brussels, the Cities Alliance Secretariat is hosted by the United Nations Office for Project Services (UNOPS). An operational arm of the United Nations, UNOPS helps a range of partners implement around 1,000 peacebuilding, humanitarian and development projects every year by expanding their capacity to manage projects, infrastructure and procurement in a sustainable and efficient manner.

Brian H. Roberts is an urban management and regional economist specialist with Land Equity International and Emeritus Professor at the University of Canberra, Australia. He has over 35 years’ experience in more than 30 countries as a professional planner, project manager, consultant and technical adviser, and 20 years’ association with universities in several countries. He is the editor, author or co-author of over 110 conference papers, journal articles, chapters and books including Urbanization and Sustainability in Asia: Good Practice Approaches to Urban Region Development and Competitive Cities in the 21st Century: Cluster-Based Local Economic Development. 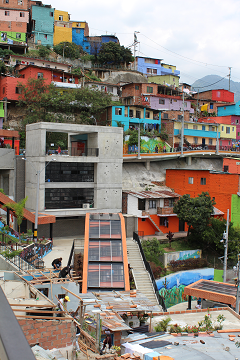 “Secondary cities have been neglected – both by national governments and development partners – for too long.”-- Cities Alliance Director William Cobbett

Watch an interview with Dr. Brian Roberts on Vimeo